8.- The tree grove at the Ferrocarril de Alcoy area

General characteristics of the Olive tree

It is a cultivated tree. The fruit is a drupe; the olive. Its leaves are rigid, wholesome, spearshaped and evergreen. The front part of the leaf is greyish green whilst the reverse is whitish.
This tree can live many years. The wild type (Olea europea sylvestris variety) is the Acebuche. This variety is characterised by having prickly branches and smaller leaves and fruits.

The fruit ripens from November to January.

Blooming: May to June. The flowers are white and small and are grouped forming little bunches.

From the olive we extract oil. For medicinal purposes its barks and leaves are used as infusion to cleanse all type of sores. The oil is a natural laxative when taken before breakfast. It is also used to ease renal and hepatic colics. The leaves can lower blood pressure and fever.
The olives are taken as appetizers and are invigorating.

This tree is considered sacred for many cultures, mainly from the Roman and Greek mithology. According to what Plutarco said, the dead were covered by branches of olive tree. In Europe Olive meant peace and victory. In the classical Greek period, olympic winners received branches of olive trees as awards.

According to the medieval magical tradition, it was believed that the smoke from burning olive stones joined together men and women. Among Christians olive trees are very important, Jesus having prayed in the Olive mountain for example, and they are quite often mentioned in the Bible.

The grove at the Ferrocarril de Alcoy area

The grove is divided in 2 sections (A y B) and shows a great variety of typical forest and cultivated Mediterranean type of trees: 18 olive trees, 4 carob , 2 fig trees, 1 acorn bush, 1 almond and 1 bay leaf tree.
CONDITION: INJURIES: Some from pruning, but not too severe ones. Shading: from the same grove itself.

EMPTYING THE TRUNK; Some olive trees from both sections A and B have been done.
ASSOCIATED LIFE: a variety of birds
ENVIRONMENT:

Retracing our steps, we will come back to the village entrance, to take the Ferrocarril de Alcoy Street (which is where the train from Alcoy to Gandia used to run, and which nowadays one can take as a Green way throug the majestic landscape of Racó del Duc) until leaving the village.
.-History description: FERROCARRIL DE ALCOY

The narrow track railroad project from Alcoy to the Grao de Gandia was presented in 1887, and the funding came from London in 1889, thanks to a Bristish company that had to build the harbours for a modern port in Gandia; The Alcoy & Gandia Railway & Harbour Company, implemented the building work between 1891-1892. Around 1910 the railway system carried 66.000 tons per year, 23.000 of them were coal for the factories in Alcoy. It also imported salt, fish, tobacco and wood by the sea, and exported towards the coast paper, cardboard, olive oil, wine, flour, textiles, fruits, vegetables, etc.

Potries was relevant for its earthenware pottery, exporting around 2000 tons of tiles and roof tiles per year, as well as a variety of agricultural products. Potries is 4 kilometres away from Vilallonga, a distance which the train took about 13 minutes to complete. The ticket Price in first class was 1,70 pesetas (0,011 euros), and the average speed of the train was 25 kilometres per hour; many travellers took advantage of this low speed to come down and pick some oranges to refresh themselves on the way. 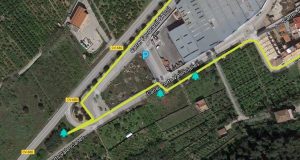 Zone A: Accesibility adapted to everyone.
Zone B: Difficulty in crossing pavements due to being too near the roads.