11.- Mulberry trees at the fairground site

Cultivated exotic decidous tree, with a roundish shape which can reach up to 10 metres high.
Its bark is greyish and cracked.

Its leaves are simple, long oval heart shaped and asymmetric; their edges are teeth shaped and sometimes divided in deep lobes. They are light green.

It blooms during the months of April and May. Its flowers are tiny. Its tiny fruits are clustered together forming the mulberry. They are eadible, white, pink and purple.

The mulberry tree (Morus alba) is probably the best known tree in China. According to tradition, cultivating it goes back to old times; Si-ling, the emperor of Huangti (2.967 A.C.) taught his nation how to breed silk worms fed by mulberry leaves.

All parts of the tree (green shoots, leaves, stalks, roots and fruits) have been used in tradictional chinese medicine for thousands of years for the treatment of many illnesses, either on their own or as components of many herbal remedies. Moreover, in Asia, from one year old mulberry trees people extract fibre to make textile materials.

The wood from older mulberry trees is hard, long-lasting and tough against woodworm; for this reason, it has always been valuable for carpentry.

Its fruits have been widely used in the mountain areas of Central Asia; it was introduced in Constantinople in the time of Justinian (in the VI century) when the monks took with them silk worms, a fact that gave the name to the famous Silk Route; hence, its cultivation started 4.600 years ago by the Chinese, who kept the secret of manufacturing natural silk to themselves. It is known as the most clever tree, because it blooms late and it is the first to give fruit.

Mulberries from the Fairground site

These mulberries are left from the mulberry trees that used to live in the former Mulberry Street in Potries. Only four of them survived, and their shape and bark growth have been affected by pruning. In fact, one of the mulberry tree is a regrowth, as the original trunk died.

CONDITION: INJURIES: They show many serious injuries, all due to pruning (specially mulberry 4). TRUNK EMPTYING: Starting.

.- Histoy of the MULBERRY tree (and the mulberry cultivation in the area)
The disappearance of the mulberries from the agricultural landscape in this area of Valencia after the “pebrina” plague from 1854 meant that mulberry trees started to be substituted by orange trees. It was a time when silk production dicreased and traditional markets which sold mulberry tree leaves and silk worm cocoons also declined. This meant that silk factories closed down too. Then, a french textile merchant coming from Nymes, Enrique Lombard, went against this tendency to abandon silk activities and established in Almoines (La Safor) a silk spinning factory: the Lombard Company S.A.

In 1946, right in the middle of Franco’s dictatorship, a law was passed regulating the sericulture sector in Spain, appointing Lombard S.A. as the only company responsable for this business in the whole Valencian and Balearic communitites. From that moment till 1975, this Company had total control over all the sericultural process; from the mulberry trees to the breed of silk worms, spinning the silk and selling and distributing all the silk hanks.

Nowadays, little by little, the thousands of mulberry trees that had been planted, have been disappearing almost completely from our sight. The mulberry leaf, the only food for the silk worm, is an inseparable part of our landscape and of the memory of many generations. 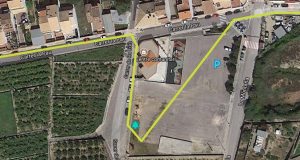 Accessibility adapted to everyone.