Evergreen trees that can reach up to 30 metres high.
The cup is slender and pointing towards the sky.
The trunk is straight; the bark is brown and cracks with aging.
The dark green imbricated leaves are tiny and thin.

It blooms in April and May. Its flowers being grouped in inflorescence; masculine flowers on the top of the branches and the femenine ones growing in groups forming cones.
Its fruit is a cone covered in scales; initially is green, but becomes brown when ripening; it is dark brown when it opens and has dropped the seeds, every other autumn .

This variety of palm tree is known as diotic. Its trunk is unique, straight and can reach up to 30 metres high with a diametre of 50 cms. It is covered by a bark made of leftover old leaves, which look like shells.

The leaves are pine looking, spiky and huge, reaching up to 5 metres long. They are light green in colour. The leaflets are 80 cms long.

The date palm trunk is erect and has many branches at the top. The flowers have 3 petals and 3 sepals, masculine ones being creamy in colour and with 6 stamens; the femenine ones are easily recognised due to their yellowish green colour, with stamens that appear to be twisted inside.

The cypress has been cultivated since old times; both Greeks and Romans already planted them in their gardens. They have also been associated with death, for which they have been planted in cemeteries.

Its wood is used for carprentry and construction; it is scented and very resistant to rotting. It is often used to make wooden boxes, and the best wood sections can be used for decorating wooden slabs, guitar pieces, woodturning, stilts, etc.

The cypresses also act as windstoppers against tramontane and mistral (northern winds) that might damage vegetable crops.

The most important therapeutic applications are: for the circulatory system, in reumathology, for digestive disorders and in dermathology. The most tender parts of the cypress tree are used to extract a special oil that can heal warts, hemorroids, varicose veins and other skin imperfections.

It is often ued as decoration in gardening, in areas with mild freezing conditions and where summer isn’t hot.

They are used as ornamental plants.

Their fruit (dates) are very nourishng and are part of their staple diet in many regions of northern African and South West Asia; for this reason dates are one the most useful fruits in the world.

The nectar from the Palm tree produces a drink called Lagmi, very precious to the inhabitants of the oasis. One foot of tree gives approximately 15 litres of this drink, but dies after two years of treatment.

Its leaves are used specially on Palm Sunday processions.

When dates are well ripened and cooked with milk, an emollient liquid is obtained, which helps to soften and soothe the respiratory tracks.

In times of scarcity the grounded pips from dates were used as coffee subsitute.

As it is an evergreen tree, generally very majestic and pointing to the sky, it was thought that it would help the dead souls to reach heaven. That is why we often find them in cemeteries, both an the entrance and spread all around them.

This palm tree has been very important since old times; it was considered by the Egyptians as symbol of fertility; the Carthaginians stamped them on their coins and on their monuments; and the Romans and Greeks used it as ornaments for their triumphant ceremonies .

In the Christian tradition, olive branches represent peace and act as reminders of the entrance of Jesus in Jerusalem.

These leaves, named as palms, were in old times symbols of Victory, and are often seen engraved in seals indicating city conquests.

It was also customary to offer palms to athlets and charriot racing winners.

The cemetery grove is formed by 43 cypresses and 2 date palm trees.
The grove is well preserved. Many have been pruned, but not excessively. Many have great injuries on thier bark at less than one metre high; most likely from machinery or vehicles (some have great areas without bark or with dead bark).

CONDITION: INJURIES: Many trees are injured in the trunk at less than one metre high. BARK DISCHARGES: Many of them with resin. SHADING: There is one stemming form the grove itself, and mainly the central ones from the cross. TRUNK EMPTYING OF THE TRUNK: It has not been done, but some have no bark left on their base.

ASSOCIATED LIFE: Diversity of birds (some goldfinches have been heard) and also some bees. 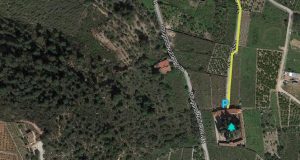 Accesibility adapted to everyone