5.- Elm grove at the Molí-Canyar resort.

Elm trees (Ulmus) are deciduous or semi-deciduous. They appeared in the Miocene period, around 40 million years ago. They came from present Central Asia initially, and then they spread all over the north hemisphere crossing the ecuator to Indonesia. During the XIX and XX century, many types of elm trees were planted as ornamental trees in Europe, in North America and in some places of the Southern Hemisphere, specially in Australia.

Elm leaves are alternating and sawn on the edges, either in a single or double way, normally double. Leaves are often asymmetric on the base and pointed on the top. This kind is hermafrodite, with apetala flowers which are pollinated by the wind, although bees can visit them. The fruit is round and comes out before the leaves, and also does the photosynthesis.

It is used to treat digestive disorders such as nephritic colics, stomac spasms, irritable bowel syndrome, gastritis y diarrohea.
Due ot its expectorant qualitites, it has been used to treat some breathing disorders. Elm bark is recommended for the treatment of illnesses such as faringitis and bronquitis, besides being recommended in treating coughs as well. Taken as an infusión, is also effective for sore throats, amigdalitis, and to expel nose secretions.

There is a legend that relates this type of tree with Napoleon Bonaparte; according to it, he wasn`t able to give birth to a male son, which he greatly desired, until he slept one night under a huge elm.
This tree has always been related with power, and during the Middle Ages justice was imparted under its shade.

The 12 elms have a natural shape, quite pruned, ( they are feather shaped); some of these have been agressively pruned, risking their survival. Most of them are slightly bent towards the East, avoiding their own shade. Three elms branch off very close to 3 metres above ground. The third and fourth elm meet between 0.30 and 0.75m above ground, sprouting at the base.

CONDITION: The main illnesses found are the injuries caused by severe pruning and its derived bark flow; besides having the leaves being eaten by beetles and caterpillars, and which are found all over the tree cup.

Along the trunk of the second elm there is a dry strip which seems to have been caused by lightning.
ASSOCIATED LIFE: All the elms are infected by adult beetles and larvae galeruca (Xanthogaleruca luteola). Besides, bats have also been found, as well as black headed “xeretes” and cicadas.
ENVIRONMENT:

Elms are able to breathe (evapotranspiration) up to 2.000 litres of water per day, this being the reason why they were used wherever evacuating the excess water was needed.
In former times, when the waterwheels pulled by horses or asses were still being being used, elms were planted near them, for it was known that thanks to their evapotranspiration animals used to breathe better.

“One can take advantage of everything found in elms, even the souls benefit from them.”

Elms have provided humans with all sort of products. From wood forage to medicinal remedies or even connections with the spirit world. Forage is one of its most practical gifts: the leaves are rich in protein, starch and minerals, and are very appreciated by farm animals. Its wood was used for centuries to make transport carts, furniture and canals…it was even considered adecuate for making temple doors in Greece.

The North American indians prepared infusions with the elm bark to treat coughs, fever or colds, and some tribes thought that it would relief pain when giving birth. There is also a rich spiritual connection between people and elms. They are associated with fairies and in Greece they were planted in cemeteries. There are Scandinavian legends that say that in the elms holes one could find the doors that joined the living with the dead.

The mill from Anyat family appears in documents as a flour mill operating since the XV century, and remained doing so until its extension and transformation at the end of the XIX and beginning of XX century, coinciding with the construction of the Alcoy-Gandia port; it was then when it was renamed Molí Canyar. It has been connected for centuries to an influential family of learned civil servants from la Font d’en Carròs, the Aynat. We consider that the old building must have been replaced by one with a new floor that would be better adapted to the tranformation requirements of the time, and that could respond to the eclectic arquitectural style and characteristics from the last part of the XIX century. However, it kept its underground original structure, which was in contact with the water coming from the common canal of Oliva (also known as mother canal).

It is one of the few water mills integrated into a watering network that had a water gathering pond just before the entrance to the flour press. This new building, besides maintaining the mechanisms for flour production, includes what was required to whiten and remove the rice husks. Furthermore, they installed electric turbines and also steam and diesel machines for energy provision. It was a factory system from those times, which included wide residential spaces for the families working in the industry, next to the administrative headquarters and offices; they even had workshops for stamping the packaging materials that were used to produce the rice.

Later on, the industry would expand creating an ice factory, which was adjoined to the northern wall next to the railway line. This would cover the needs of ice provision by train from Alcoy to Gandia. This old mill, which had been abandoned for many years, is now a lovely restaurant resort called Molí Canyar.

Very near the elm grove we can find the old railway Alcoy-Gandia point woman’s hut. 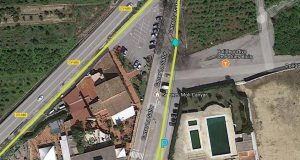 Accessibility adapted to all.