It is an evergreen tree, with a roundish cup, very irregular, with a height between 5 and 10 m, and a cup width of 6 to 10 m. It has a twisted trunk, and it has a smooth reddish brown bark. It has compound leaves, between 10 and 30 cms long. The leaflets are between 2 and 7 cm, and are dark green on top, and matt green on their back.
It blooms between August and October, with unglamorous 2 mm reddish yellow flowers arranged in bunches of up to 5 cm, often born from the trunk, and being separated by sexes in different trees. The fruits are carob beans, blackish violet coriaceae when ripe, between 5 to 25 cms long, which ripen the following summer.

Basically the carob tree is cultivated for its fruit and seeds.
Carob beans are sweet and caffeine free, without the stimulating effects of the cacao, low in fat and calories. It is used in different ways: the whole fruit is used as animal feed for sheep, goats, pigs, and horses. From the flesh carob flour is obtained, and used as cacao substitute when toasted to make chocolate and cakes. Alcohol, sugar and certain laxatives can also be obtained from it.

The small carob beans, due to their stable weight, in former times were used as a measurement unit (1 gram being equal to 5 seeds). The word comes from its greek name – keration –, which was used to weight jewels. Nowadays the measurement is done in a virtual way, and 1 carot equals 0’2 grams, which is the standard weight of a carob seed.

The carob tree from the Serpis river bank

The carob tree is divided in three trunks, one meter above ground. When not too pruned, it has a natural shape, sliding its weight towards the shore of the Serpis river bank. It has a healthy bark, and it is rich in the production of carob beans.

CONDITION: INJURIES: only pruning injuries, but quite important ones. Putrefaction: the main trunk has been completely emptied out. Shading: minimal shade onto the small house next to the path by the river. HOLLOWING OUT OF THE TRUNK: Totally done, apparently due to the pruning that has been done in the branch facing Potries. Observations: Fungus stuck to the strains (cepa). Some sawdust has been detected inside the hollow trunk. Extreme pruning has been done on the side of the trunk facing Potries.

Ethnobotany and /or associated history:

Following the walk from the fig tree at the Casa Clara, on our right we will see the Serpis river; but before arriving to the carob tree on the Serpis river bank top, we can stop and see the magnificent water hatch hidraulic system of the Casa Fosca (The water route), as well as seeing the ruins of an old Riu Rau typical building where raisins were dried.

From that area you can observe the Serpis, the Mollo de la Creu and the Monduver mountains, as well as the Palma Castle, the Cuta, and the Casa Alfás.

The river Serpis and its environment, between Alcoy and its mouth in Gandia, has been declared to be a natural site by the Land and Territory Department. It is 50 kilometres long and has an approximate surface of 10.000 hectares; it is a special setting due to landscape, ecological and cultural values, derived from the harmonious relationship between people and nature. People from this wide area, grouped by the main river theme, make a cultural itinerary where landscape transforms into history. This relationship is manifested in the integration between people and paths along the landscape; also in the agricultural fields that make up the natural topography and highlight it, and in the special hidraulic systems derived from the river, as well as by the architecture generated by them…the beauty also comes from the historical respect towards the topographic elements that conform the identity of the place, such as river banks, mountain ridges, or topographic landmarks.

The river is limited by the Mariola mountain ridge and the Benicadell mountain in the North, and in the South by the Safor, Cuta, Alfaro, Serrella and Aitana mountains; this part of the Serpis river located between the Valencia and Alicante provinces, acts in ecologic and territoral terms, as a connecting element between the mountains and the coast, creating an exceptional mosaic of ecosystems and landscapes. In this way, once the river moves through the mountain areas, crossing the spectacular sights at the Barranc de l’Infern gorge at the Raco del Duc, it reaches the plains in Villalonga municipal district. It is in this place where the river broadens out and loses slopes, every time digging a deeper river bed, widely meandering and leaving beautiful ponds full of life.

There are water animal species of great interest, such as the sweet river prawn (Dugastella valentina), the water snail (Melanopsis dufouri), the “cacho” (Leuciscus pyrenaicus) and the common catfish (Barbus
bocagei), among other more common ones. The mountains and the fluvial ecosystem foster a multitude of birds such as the royal eagle (Aquila chrysaetos), the bonelli’s eagle (Hieraaetus fasciatus), the royal owl (Bubo bubo) and the kingfisher (Alcedo atthis). From the river bank vegetation in the Serpis the following species stand out; poplars (Populus nigra) and less quantity of white elms (Populus alba), both deciduous. Several species of willow trees (Salix eleagnos, S.fragilis) are also present in some sections of the river, as well as the abundant oleander (Nerium oleander). Next to the oleander the tamarind can be easily found (Tamarix gallica) and so can the blackberry (Rubus ulmifolius). Following the course of the river, there are many mono-specific reeds (Arundo donax) and very near the river current we find the common reed grass (Phragmites australis), a more slender type that requires the presence of water. Occupying the same ecological niche we can see bullrush (Typha latifolia) and on the river edges we find watercress (Roripa Nasturtium-aquaticum), wild celery (Apium nodiflorum) and water lilies ( Potamogeton natans y P. pectinatus).

If you arrive by car, we advise you to leave the car in the parking area by the Ferrocarril de Alcoy street, and walk 350 metres until the carob tree. You have to be careful when crossing the main road.

If you arrive by bike or motorbike you can park very near the carob tree. 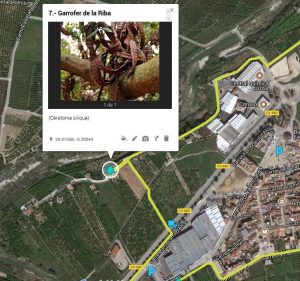 Accesibility adapted to everyone.